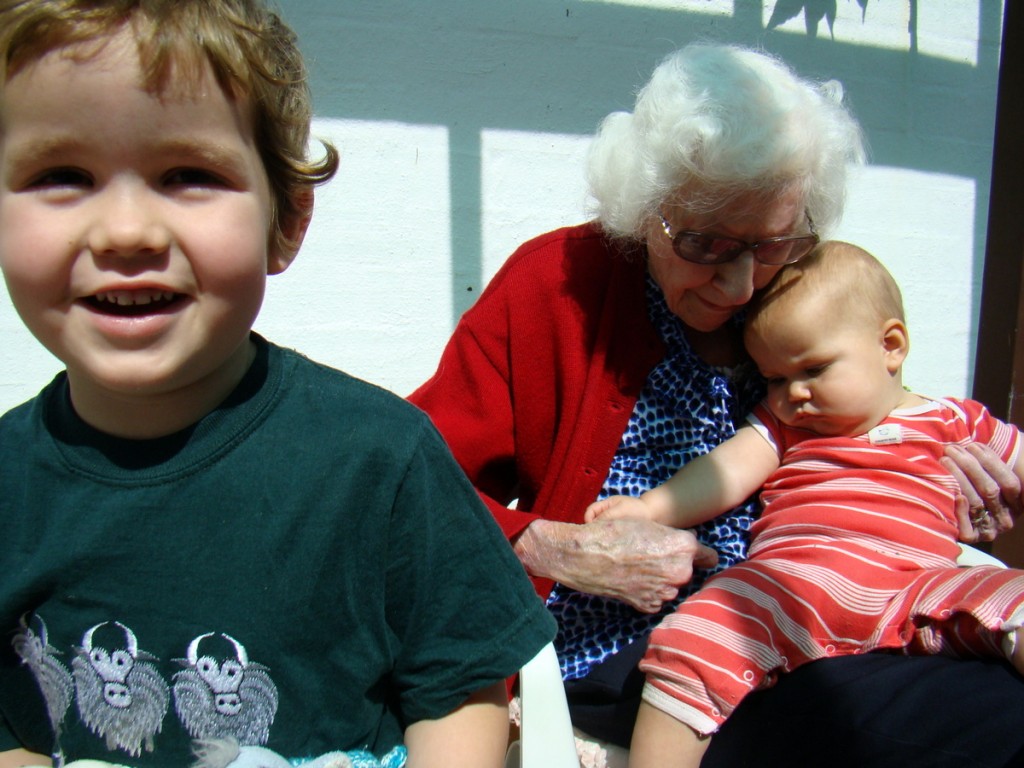 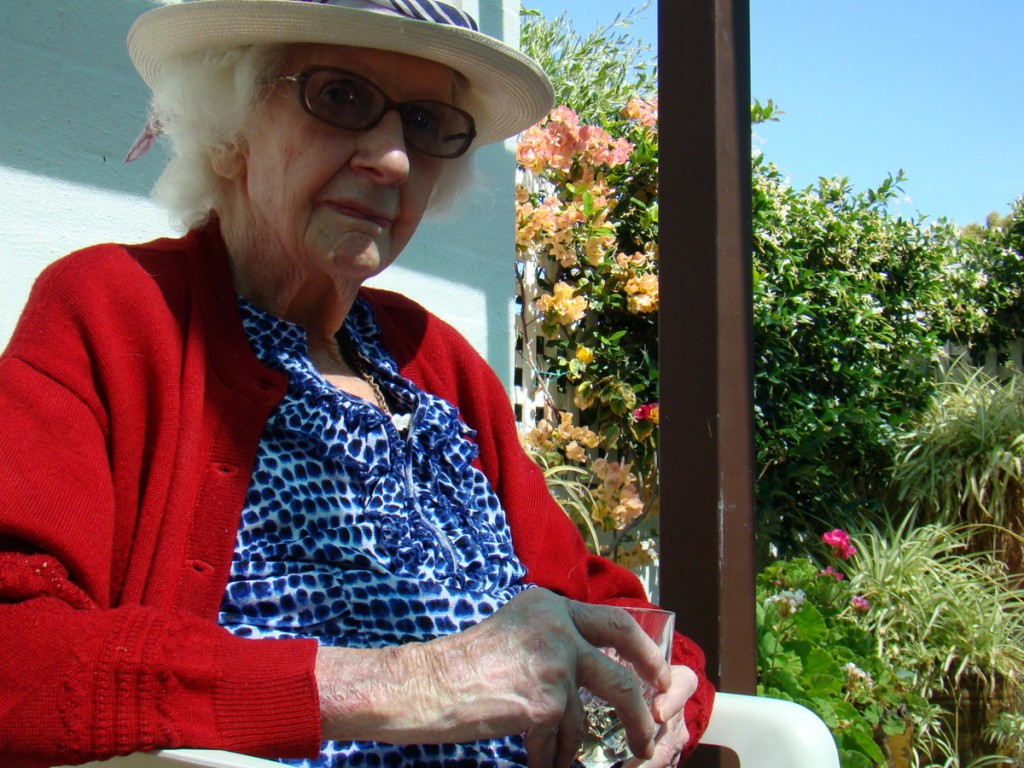 The following are excerpts of my father’s speech at her funeral. His words made my heart ache with love and loss, and I would like to share some of them here.

Helen was born on 24 June 1917 in Inverness in the Highlands of Scotland. However it was here in Perth where she was conceived. Pregnant with Helen, Annie Cook, her mother, returned home to Scotland, unimpressed according to Helen, by the desolation and uncultured life that was Perth at the time. That early trip to Scotland was during wartime when ocean crossings were dangerous. Perhaps that early sea voyage instilled in Helen a life-long love of travel.

(As an aside, and just to impress upon you the link she provided to our past, when we were looking at Helen’s birth certificate yesterday I noticed in the fine print on the back of the document reference to the penalties for falsifying information. Those penalties included two years in jail or,“Transportation” for seven years”. Of course transportation had ceased long before 1917 but perhaps the Scots had printed a good number of the birth certificates and were not going to discard them just because of that minor detail.)

Her father, Thomas Cook, followed his wife some months later and persuaded Annie, now with baby Helen to return back to Perth.

(When Helen was 16) Ken Black saw Helen playing tennis at Karri Banks in the Porongurup’s and began a lengthy courting. Five years later, in 1938, and having considered some alternative suitors, Helen, by then 21, married Ken. The war arrived with the fall of Singapore and Helen spent much of the next few years as a volunteer with the Red Cross. I think she was quite pleased with the certificate showing she had passed a basic motor mechanic course. Despite this proficiency, I cannot recall Helen ever using a self-service petrol station, preferring to hunt out one of the few stations offering full service.

With women there were some friendships that endured for many decades. Perhaps most notable was the book club which started not long after the war ended. A dozen or so young mothers got together and formed the group. A few years ago an article appeared in the local paper about the longevity of their association – which, by the way, never took in new members. When they met, the story goes, the women would talk about everything (children, husbands, and later, grandchildren)… but never about books. The women all outlasted their husbands; Helen was one of the last three surviving members.

And for decades her dairies, which I only just found a couple of days ago at the bottom of
her wardrobe, show a constant schedule of rounds of mah-jong, solo, bridge and volunteer commitments. Indeed if anything characterised her life it was her ongoing role as a volunteer. Right up to the time that she handed in her driver’s license (at age 90) she continued to offer her services. I recall her last role was on the front counter at one of the charity shops in Subiaco.

That was one thing that people remembered about Helen, she was an attractive woman. The years passed but she never seemed to grow older – for some jobs and certainly for male friends she presented herself, very convincingly, as ten, and even fifteen years younger than she was.

People seemed to love her company. She would say modestly that was only because she got people talking about themselves. I think she tried to engage with everyone she met – even at a restaurant she would always ask the wait staff what else they were doing. In later years, when she was hospitalised for various complaints, she would invariably find out about the lives of the nurses and other staff.

In fact, if she had an unconscious aversion to anything I think it would have been a lull in conversation. If you were in her company it was not to share silence; you would be expected to talk. People often felt drawn to confide in her. She was trusted to hold confidences. Perhaps it was because she rarely expressed strong opinions about others (with the exception of politicians) and if she did it was only to those closest to her.

She was genuinely interested and caring of others. I don’t recall her ever putting herself first – it sounds trite but she was undemanding with everyone, including personal carers who sat on her couch, drank her tea and confided in her.

To be frank, it must be admitted that Helen enjoyed the odd drink or two. There is a liquor store on Waratah Avenue that will be wondering why the sales of brandy has dropped so dramatically. I hasten to add that I never saw my mother intoxicated – which is more than she would say of a particular time in my teenage years.

I don’t think of my mother as a quiet or reflective woman. Her views of organised religion were invariably dismissive. In later years her personal philosophy was expressed as “no good looking back” (which she attributed to the Buddha) and “old age is a bugger” (attributed to George Randall, an old friend of the family). Overall, and given the various ailments that she suffered over the past years she very rarely complained. I think there was a strong element of stoicism in her Scottish genes.

Over the past few years Helen and I talked openly of the declining quality of her life and the arrangements she would like to have in place for her funeral.

She would often refer to having passed her “use-by date”. (As an aside I would note that like many of the food jars in her fridge, she remained quite good long after that indicated by the nominated expiry date).

At ninety-five, three months shy of ninety-six, Helen was truly ready to go. Indeed she’d had a couple of false starts, as recently as the week before, but this time she achieved her heart’s desire.

She was adamant that this moment should not be a time for mourning but for celebrating. Her own words were that her passing should be marked by “a bloody good party and toast”.

Last Thursday afternoon I found Helen lying peacefully on her couch, her life ebbing away, I noticed on her patio table the remains of her lunchtime glass of brandy and dry ginger. I’d like to think that Helen had spent her last morning enjoying the autumn sunshine before toasting “farewell” and departing.

Yes, there is a great personal sadness in knowing that we will never again sit together and talk of people and places or share a hug and tell the other they are loved. But I am grateful that Helen found a way to exit life, true to form, at her home, with dignity and held by family in her final moments.

There is a saying to the effect that “When someone you love becomes a memory, that memory becomes a treasure.”

Whether your memories of her are many or few, Helen has bequeathed a treasure to each person here today. Her generous nature lives on each time she is remembered.